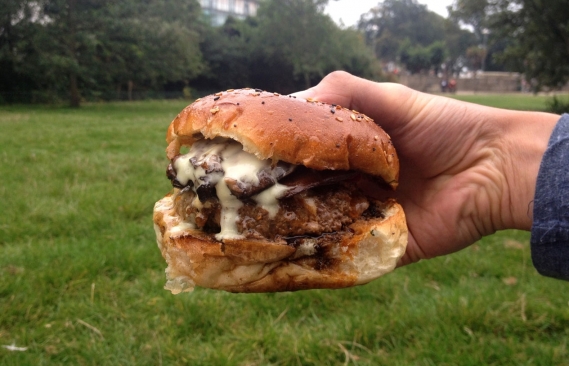 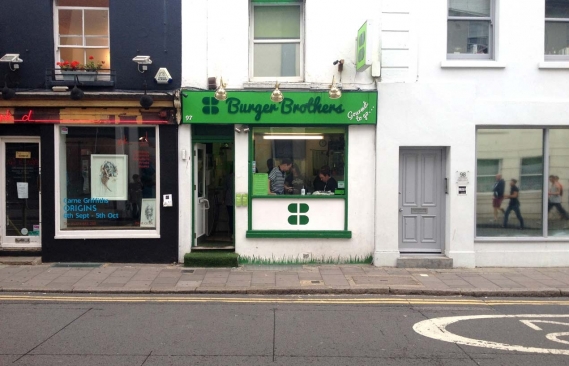 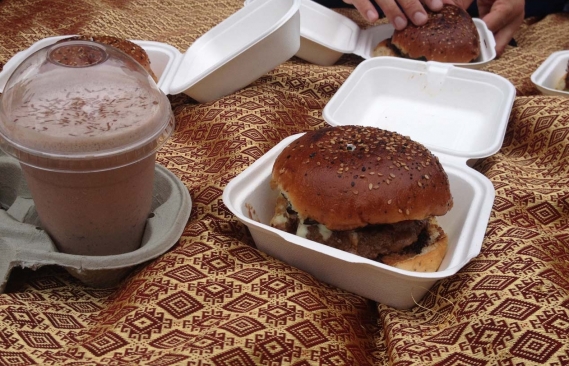 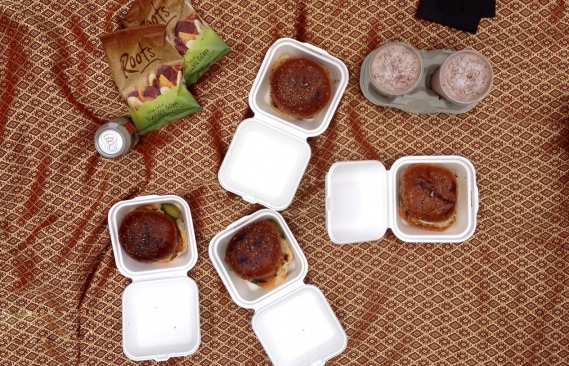 Having dropped some serious science on our Code 7 Facebook page last week when we announced our new burger review site (over 2000 engagements, a Code 7 record), we were inundated with suggested venues for this month's taste test. After much deliberation we settled on Burger Brothers in North Laine.

We'd heard nothing but good things about this independently owned takeaway joint in the heart of Brighton's buzzing metropolis, not least of which was being named the No.1 burger restaurant in the UK by TripAdvisor travellers. We literally (in the literal sense of the word) couldn't wait to get down there and taste what these guys were serving up.

Burger Bothers is a slightly different venue to those we've visited to date, simply because this is a takeaway setup, rather than a sit down affair. The burgers here are served up over a counter and in foam boxes, not on wooden chopping boards or slabs of artisan slate. Old school.

We rang through our order in advance as we thought Friday lunch time in the centre of Brighton, on the day of the dConstruct conference at the Dome, might have left us queueing. Greg can get a bit grumpy when he's hungry.

In terms of the burgers themselves, all the beef is 100% prime British beef (like us) and is locally sourced and minced on the premises.

Tristan opted for the 'Simple Jack' which is the entry level offering served up with a slice of Monterey Jack cheese, red sauce and mayonnaise.

Dan and Stuart waded into the 'Classic Beef' (of course they did) which comes with rocket leaves, tomatoes, cheddar cheese, mustard, relish, black pepper mayo and caramelised onions.

Greg, ever the maverick, decided to tuck into the impressive 'Bennetton Burger' consisting of award winning stilton, portobello mushroom, chorizo, wasabi mayo, onions and a balsamic vinegar glaze. He also threw caution to the wind by adding a 'Chilli Tickle' - a blend of habanero and chipotle chilli.

Probably worth mentioning here that Burger Brothers do not sell chips / french fries. I know, right? But we did know this in advance and having tucked into this tasty, humdinging, whirling dervish of lunch time deliciousness, I've got to say, I couldn't give a hoot. Its probably fair to say though, that of the 4 of us, I was the least bothered about the lack of chips and a couple of the other tasters marked them down because of it.

In terms of how the Burger Brothers compared to some of the other placed we've visited and burgers we've tasted - night and day. I was reluctant to go handing out 10s when scoring the food as it leaves you nowhere to go later but I seriously couldn't fault the quality of the food; it was simply delicious.

The ingredients were fresh, the beef was succulent, full of flavour and mouth wateringly moreish. Really surprising was the quality of the bun though. It was incredible. Soft but firm and wonderfully fresh and tasty - almost the star of the show itself. Whisper it quietly.

Prior to getting ourselves down to Burger Brothers we'd done a quick online search to see what people were saying about them and we kind of scoffed at some of the write ups. I mean, just how good can they be? How much better can one burger be than another?

Well, Dan was happy to say it's the best burger he's ever eaten. So much so he was back there the day after for another one.

Seriously, burger fans - get yourself down there. I promise you won't be disappointed. On the phone and in person the guys at Burger Brothers are courteous, professional and friendly - fantastic service and excellent eats.

Will it be bettered? Stay tuned - you'll be the 1st to find out if it does.

Not much I can say here really. Burger Brothers is certainly not set up for wheelchair users as it's narrow entrance has a couple of fairly steep steps up. Having spoken to them over the phone though, I'm pretty sure they'd be more than willing to help with your order though.