BBQ Shack at the World's End 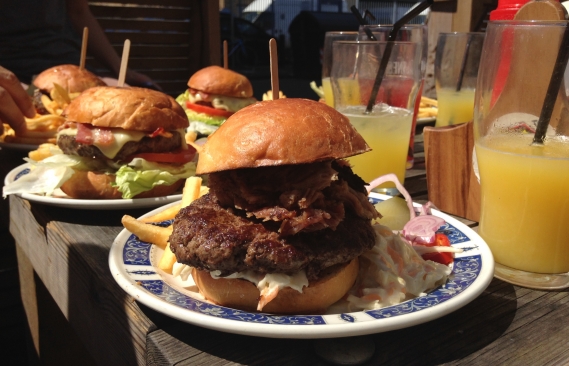 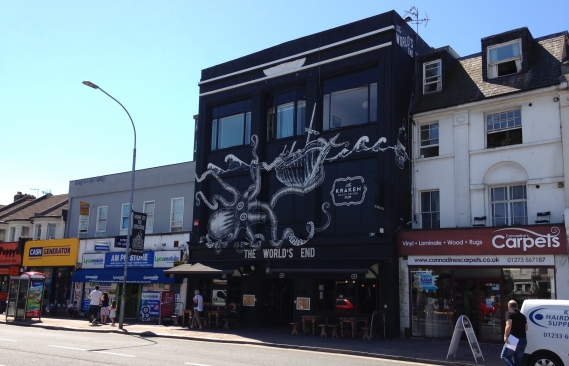 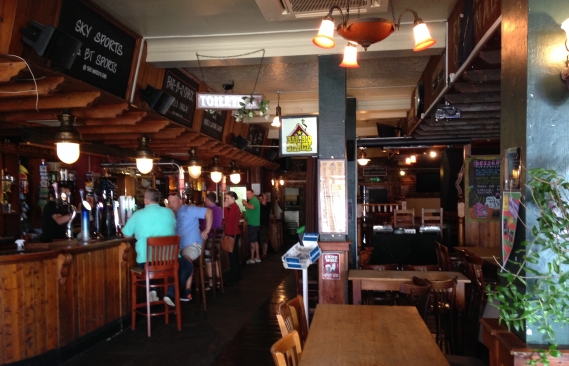 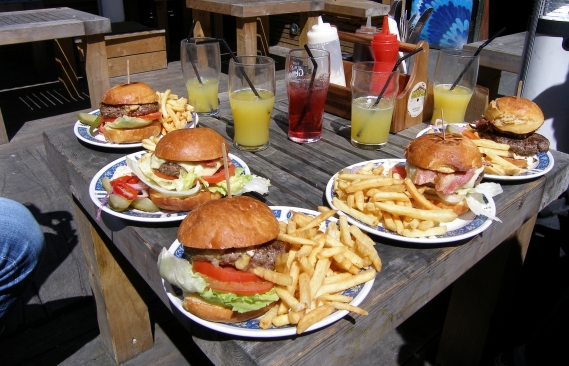 Burger fans of Brighton and Hove rejoice! It's been a while since we've all jumped in the back of the antique Audi hatchback and piled into the metropolis to scoff some delicious, juicy beef patties. But, in the words of early 90's British hip-hoppers, Caveman, we're 'back to cause mayhem'. (Or possibly a minor disturbance in a worst case scenario).

This month we added a new permanent taster to the team, Mark, so to celebrate his appointment we headed down to the BBQ Shack at the World's End on London Road. The sun was shining, the birds were singing in the trees, the Australian batting line up at been reduced to rubble the previous day - all was good in the world.

We'd heard good things about the BBQ Shack menu and the word is that the burgers are choice. The menu boasts that the BBQ Shack were British BBQ Society Pitmaster Series Grand Champions in 2010, 2011 and 2012. Trip Advisor reviewer OBS11 claims that the BBQ Shack is 'the best burger joint in Brighton'. To that I say, 'we'll be the judge of that OBS11'. The proof of the pudding is in the yada, yada, yada.

So, with OBS11's sparkling endorsement bouncing around inside our impressionable minds we landed on London Road and piled into the World's End to see what was on offer.

The pub itself is pretty well known if you're from the area. It's a hella big yard, resplendent with TV screens, a pool table, arcade machines, fruities, noisy youts and lunchtime drinkers. Dan gets our drinks in as he always does; cokes, OJ and lemonades and apple juices all round. It is Friday after all.

The menu is long and distinguished and, as is traditional in a BBQ shack, absolutely brimming with meat. The menu states that 'nobody beats our meat' and that's exactly what we're here to find out about. We're strictly burger heads though, so what's on offer?

The real artery hardener here though is the O.D.B, which we're told 'may not be the best but is almost certainly the baddest burger in Brighton'. This leviathan, this mammoth, this behemoth consists of one 9oz patty topped with pulled pork, brisket, chorizo, bacon, double cheese and onion rings. It also comes with a fairly chunky price tag, £15.95 of your English. It's fair to say that with an afternoon in office in front of us, this monster wasn't going to be troubling the scorers today. Too big.

So, after settling down in the 'garden' out back Dan set off to the bar to order the following from a very friendly and personable member of the bar staff:

Stuart and Dan, the Albion.

Abby and Mark, the Bacon Cheeseburger

The burgers arrived around 20 minutes later and 'wow', these things are huge. Certainly the biggest we've seen since we began this adventure. They were accompanied by a generous portion of fries, a dollop of coleslaw, gherkins, onions and peppers.

Unfortunately, dear readers, I've got to say that the size of these burgers certainly didn't match the expectancy. The burger buns were absolutely huge! The patties were big and I guess the bun was appropriately sized to attempt to tame the beast within but our opinion was that these buns were not of sufficient quality. I found the bun to be over toasted, dry, perhaps even a little burnt and overall far too heavy. Abby's bun simply collapsed under the strain of trying to house it's temporary tenant. This can happen, buns falls apart sometimes, but all 5 tasters were disappointed with them. I've read elsewhere that they sometimes serve up sesame seed baps so maybe what we were given aren't part of their normal offering?

The burger patty itself, as I've already alluded to, was big. It was juicy, cooked medium rare, with a nice course mincemeaty texture. Unfortunately, taste wise, it failed to hit the mark again. The meat tasted ok, nothing special really. It was cooked really well but was a bit under seasoned and all a bit meh!

Dan and Stuart who both had the Albion burger were split on the addition of the Stilton. Dan felt it was just about the right amount, adding a nice bit of cheesy saltiness to the overall flavour. Stuart felt there just wasn't enough of it. It tasted good but was too sparse and given the overall lack of seasoning in the burger itself the flavour would have been improved. The internal accompaniments, the lettuce and tomato, were good, adding a bit of crunch and a bit of texture.

Reports from Abby and Mark on the Bacon Cheeseburger were consistent with the other tasters. Overall, just a bit of a let down. The bacon tasted ok but wasn't particularly crispy, which to our taste is always better in a burger. It gives it a bit of crunch to add to the smoky, salty favour. There was also a lack of sauce, in any of the burgers actually. Some people might prefer them that way but we like a bit of bit of sauce (ooh, matron), particularly where the bun's a bit dry. I think it's nice to have a beautiful bbq sauce with a bacon cheese, and we were at the BBQ Shack after all.

Finally, let's move on to the Memphis burger. At last, a winner! Steve LOVED the pulled pork. Loved it, bruv! Smoky, succulent, delicious. A real star of the show here, and it was quite an entertaining experience watching Steve get stuck in; elbows, juices and pork flying everywhere! The pork and the burger combination worked really well together, although, unfortunately, the burger bun was not good, arrrrgggghhhhh!!!

Now, listen up! I've said it before, and I'll say it again. Our reviews should never be read as an endorsement for or warning against any of the joints we visit. We completely understand that all experiences are subjective and there's are lots of factors that can affect them.

On this occasion, it's fair to say we didn't have the best burger we've ever had but don't take our word for it. Get down there and try it for yourselves. The internets has a lot of love for the BBQ Shack and if there's one thing we all know about the internets is that EVERYTHING divides opinion, and burgers are no exception. Make your own minds up, then come back here and tell us we're wrong!

Want to visit BBQ Shack at the World's End?

The World's End has two accessible toilets on the ground floor and the pub itself is easily accessed via the front or back entrance to the building.