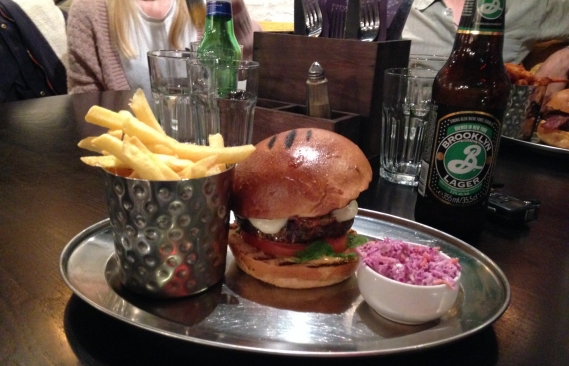 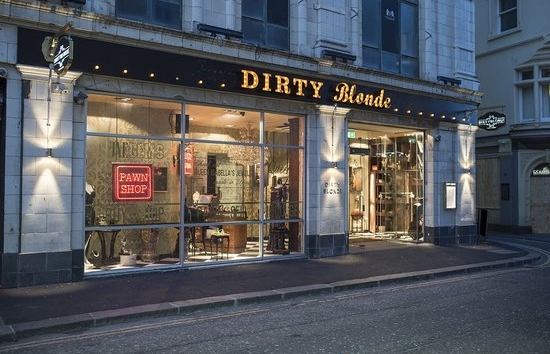 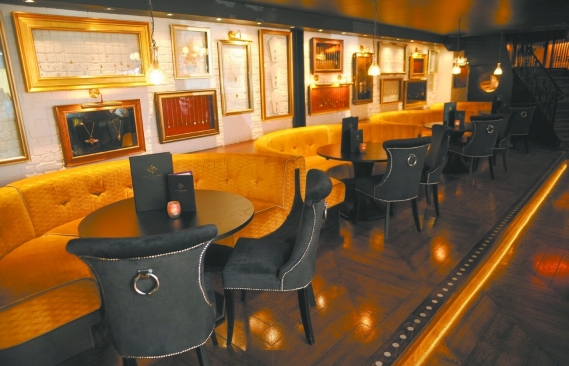 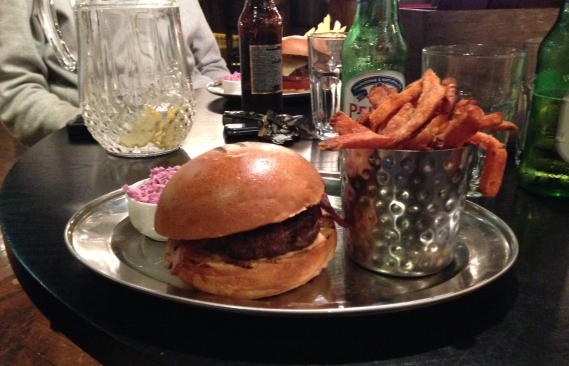 In the words of E.P.M.D. on the timeless classic 'You gots to chill,' - Relax your mind and let your conscience be free, and get down to the sound of a burger review-ey'.

Not my words rap and burger fans, the words of Erick Sermon, or E Double if you prefer. And who are we to argue with one the East Coast's premier emcees?

Let's get straight down to (strictly) business.

On what was probably the wet and coldest August day for several decades Dan decided to take the Code 7 team down to Brighton's Big Screen on Brighton Beach for an evening of burgers, beers and Blade Runner.

We'd decided in advance that we were going to try Dirty Blonde on East Street as we'd previously gone down there on a Friday lunchtime only to find out they're strictly an evening venue. It was also pretty close to the big screen which made our onward journey a little easier bearing in mind the teeming rain and gusting South Westerly winds.

If you've been past Dirty Blonde before, or even inside it, you'd agree that it has a pretty dope look to it. It kind of looks like something you'd expect to see in a pre-war American Edward Hopper painting. You feeling me, bruv? What I'm basically saying, is that I like it. You could quite easily mistake it for a cocktail bar, or even a pawn shop, but no longer for a gentlemen's establishment, as it often was under it's previous ownership.

We were shown to a booth along a side wall towards the rear of the venue, right underneath a Scarface-esque style staircase. Again, pretty cool although I drew the short straw and got the 'back to the restaurant seat' as always. It's like eating out with my wife all over again.

The waitress brought over the menus along with some very unusual truffle seasoned popcorn, and took an order for 5 beers. Yes, we're out in the evening this time so beers are very much allowed. 1 Brooklyn, 3 Peronis and 1 Corona, please.

4 and a half hours later, the beers turned up and the waitress arrived to take our order. I exaggerate of course but I sure was thirsty and it did seem like a long time to pop five bottle tops off of a few cold ones.

The menu at Dirty Blonde is comprehensive and caters for the most discerning burger connoisseur. There are 10 burgers to choose from and a good selection of different flavour combos in the opinion of this reviewer.

I'm not going to list all the burgers on offer here as it will take all day but what I can tell you is that Abby and Mark plumped for the entry level 'Juicy Lucy' which was stuffed with American style cheese (stuffed within the burger patty), and topped with smokey maple bacon. Mark opted to have his without any of that healthy salady stuff. You don't win friends with salad, as we all know.

Dan opted for the 'Black 'N' Blue' in which the patty was salted with a Cajun seasoning and served up with oozey, melted Blacksticks Blue cheese and crispy onions.

All Dirty Blonde burgers are homemade from three choice cuts of beef and seasoned with salt and pepper. They're all chargrilled and served up in a lovely brioche bun with crispy lettuce, tomatoes, red onions with a side order of a variety of fries and a buttermilk slaw.

So, in the words of Brentford scholar and voice of a generation, Joey Essex, 'What are you saying?'

Ok, well let me tell you. We ordered quite a cross section of different dishes this time and the table was truly divided when it comes to the scores.

The Juicy Lucy seemed to be the standout burger amongst the team. It certainly was the juiciest! The general consensus amongst the rest of the reviewers was that the burgers at Dirty Blonde were ever so slightly dry. The oozy, gooey cheese in the 'Juicy Lucy' really helped to moisturise the inside of the patty and helped deliver a packed punch full of flavour. Mark thought that they were a little stingy on the (excellent) bacon, and Abby would have liked some BBQ sauce but overall they were pretty happy.

Dean was not quite so happy with 'The Don' unfortunately. As I've already mentioned the burger patty was a little dry and although the pulled pork was delicious, there wasn't enough of it. At £13.95 this burger comes with a fairly chunky price tag and I think Dean felt it wasn't worth the dosh - although Dan's paying anyway so 'you gots to chill, Deano'.

The 'Black N Blue' and 'The Italian Job' were both pretty average. Again the burgers were a little dry, although tasty. The mozzarella in the Italian Job was nice and gooey but I often think that it doesn't bring much to the table taste wise. It could have done with a little more sauce, perhaps some mayo or even some more of that spicy tomato sauce. We did ask for some ketchup and were given a tiny little pot to share between five of us!

As our regular readers will know, this particular reviewer is bun obsessed. To me, the bun is just as important as the burger itself. The bun can make or break the dish for me. So it was somewhat of a relief when this one turned up; Dirty Blonde baps are toasted buttery brioche buns, ever so slightly seared for artistic value. They're good. Not brilliant but certainly worth a mention. Tasty and able to hold the burger together during it's inevitable demise.

Another thing worth a mention here are the sweet potato fries, these were absolutely delicious. We talked before they arrived about how it's difficult to get these right, often they're a real let down, soft and squidgy and all a bit underwhelming. Not the case here though. They really were fantastic. Crunchy, well seasoned and a real highlight. We'd go back here for these alone!

All in all, we had a pretty good set of burgers at Dirty Blonde and I would recommend you getting down there to check it out. The venue itself is fresh and has a nice relaxed vibe and the food is good. The menu is comprehensive so even if you don't fancy a burger (which would be odd) there's plenty of other eats to sample.

Until we meet again, burger bredrin.

The toilets were upstairs and I'm afraid I failed to notice any additional accessible toilets on the lower level of the bar. I'll check with the venue and update this shortly.