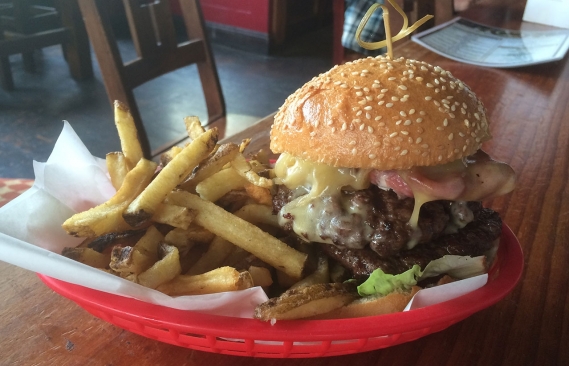 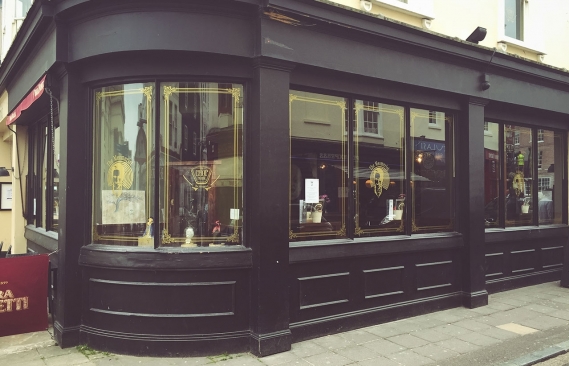 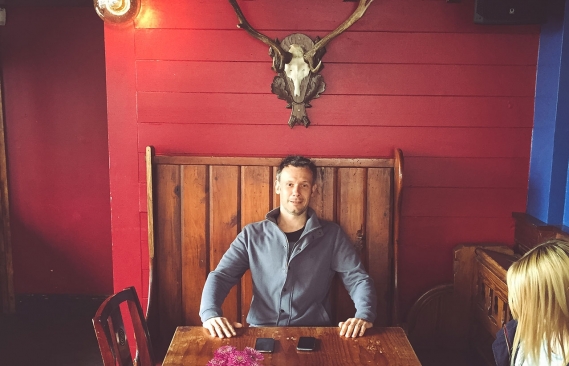 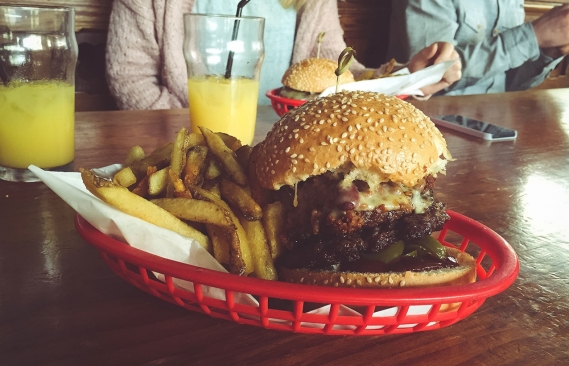 Anyway, hello burger lovers. Hope you've all been enjoying this rather nice weather we've been having of late. We've been spending quite of lot of time supping cups of tea, playing Mariokart, building web stuff and eating cheese on toast. The key to a good cheese on toast is using a good quality loaf, preferably granary, although many argue you can't go wrong with a quality white tin. I've heard some people like sliced onions and butter under the cheese claiming it improves the overall taste. I'm not a fan of this option personally but if that's your idea of haute cuisine, I'm not going to try and dissuade you. Always use a good quality mature cheddar and once grilled top of with a sprinkling of Lea & Perrins Worcestershire sauce (other brands are available). Boom.

Fortunately, we'd happened to pass The Mesmerist on the way down there, and we'd actually checked out the menu and taken a few pictures for later reference. A couple of the younger members of the team mentioned they'd been here numerous times in the past but never for food. Strictly beer and spirits for these young heads. Believe.

The Mesmerist is located on Prince Albert Street in the lanes. Ok, so we're still arguing about whether it's actually in the lanes, there's a map link below. You decide. The place itself is pretty laid back, the bar staff were nice and relaxed and friendly. The decor's pretty ordinary I'd say, apparently inspired by '1930s gin palaces, burlesque and the steam punk movement'. I'm not sure what the atmos is like in the evening, I'm far too old to be out after dark, but we were the only patrons in the establishment this lunchtime (which is always a bit worrisome, particularly on a Friday lunchtime).

The burger menu itself is pretty comprehensive and accommodates the needs of the most discerning of diners (even vegetarians apparently - the Mac 'N' Cheese burger). The Mesmerist has branded their burger selection as 'Bronx Burgers' and, according to the blurb, all are made from locally sourced, ground tender cuts of beef with the buns being fresh baked and delivered daily. All the burgers are served with skin-on, tripled-cooked, hand-cut french fries and if that's not enough adjectives for you they're also paprika-seasoned.

There are 7 different varieties of burger up for election here (topical). The entry level offering is the standard hamburger (of course it is). This little baby comes as described; a fresh patty, a squidgy bun and a light squeeze of the house's burger sauce. It's unusual but ultimately quite satisfying to see a completely naked burger on the menu. You can also double the meat content by adding a second patty for just two extra bucks.

The Mexican (the top level burger, not a moustachioed Dan - see 2013's Movember) is a leviathan amongst its contemporaries. This monster packs one hell of a punch. It's a bit messy, but then they all were. Greg got tucked in to the doubled up version of this one and it was worth the entrance fee alone watching him trying to get a bite out of it! Oozing with cheese, jalapenos and homemade chilli con carne it truly was 'man versus food'. Adam Richman, eat your heart out. Not literally though, Adam. (I wouldn't put it past him!)

Abby and Dan, perhaps more sensibly voted (topical reference number 2) for the imaginatively titled 'cheeseburger' which contained, yes you've guessed it, cheese. In this instance, none other than Monterey Jack's finest American semi-hard cheese. Both these burger mavericks opted to double up on their beef content too.

Myself and Steve both opted for the 'Bronx' - taking it back to the old school. Who remembers the Roxanne Wars? Probably just me. Big shout out to Marley Marl if you're reading this. I digress. What was I talking about? Oh, yeah. So, the Bronx Burger, which Steve and I both times two'd (naturally), was an absolute monster too. Packed full of bacon, beautiful white onions, crispy lettuce, cheese and burger sauce, it was particularly challenging eating this without spraying burger elements to all corners of the restaurant. We bearded folk can sometimes find these moments particularly troublesome.

What's the verdict, I hear you all shout.

All in all, a satisfactory performance from this latest addition to the Brighton burger scene. Initially, I was impressed with the overall appearance and the first few bites were intriguing. Enough to keep on coming back for more. The problem was, and this view was widely shared around the table, that the meat itself was a little on the dry side and it definitely failed the 'juicyness' test. It's unusual for all of us to agree on anything when we're reviewing burgers but this was a unanimous points decision I'm afraid to say. The flavour of meat itself was good, tasty and well seasoned but just lacking that je ne sais quois.

The buns were good, nice and fresh, topped with sesame seeds and remaining firmly resolute in containing the ingredients within. As I mentioned, the onions on the Bronx burger were pretty spectacular and the bacon was pretty good too. There's a school of thought that argues that bacon is wasted in a burger as its flavour is often lost. Not here though. Good, thick cut, tasty bacon.

As I always say when writing these reviews, please don't be put off by anything we say here. The Mesmerist serves up some pretty decent burgers, with a great selection and at some excellent prices. £5.50 for a decent burger in a sit down restaurant is amazing.

Get yourselves down there and let us know what you think.

Want to visit The Mesmerist?

Nothing to report here I'm afraid. It's difficult access wise as it's in the middle of a busy and fairly heavily controlled parking area of Brighton. Nearest parking is a fair distance. Accessible toilets are available.