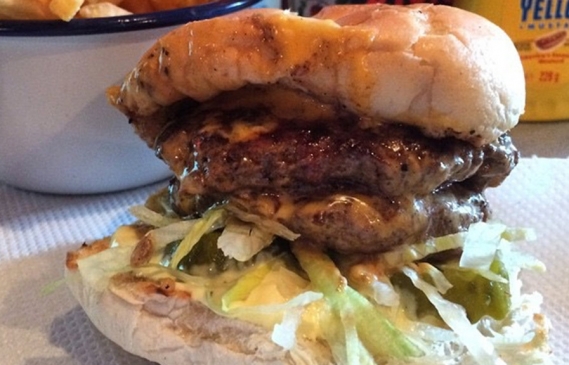 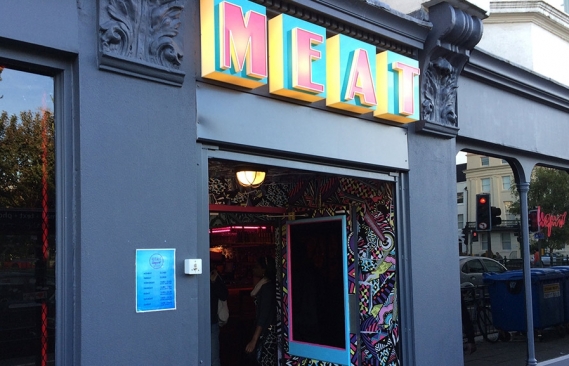 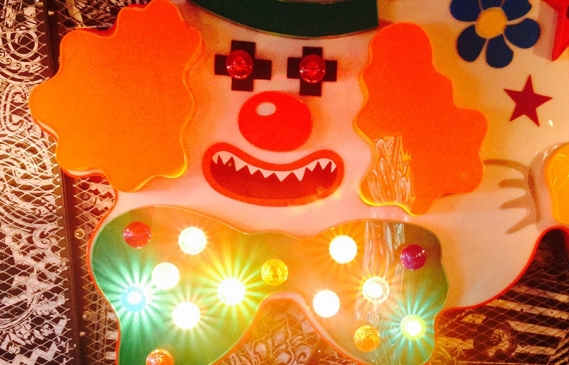 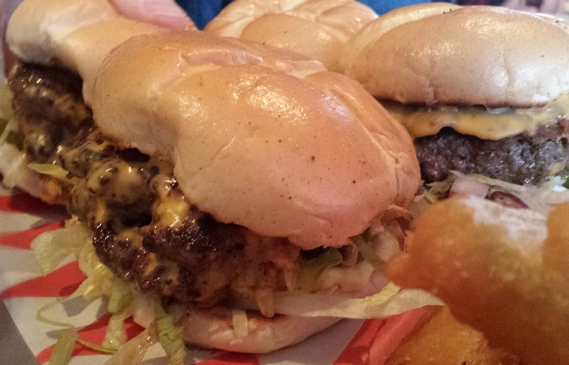 Yes, was the start of my last jam, so here it is again! Another burger jam.

Word to your Moms, burger fans! Just thought I'd let Public Enemy drop some serious science before we come through with this month's main event - a burger tasting treat with a new developer and guest reviewer on the proverbial wheels of steel. (Sidebar - 'Yes' wasn't actually the start of my last jam, it was in fact 'Big')

This month we decided to mix things up a bit by telling Greg that he wasn't welcome to join us because we wanted Steve, the new boy, and Kelly, our friend and guest reviewer from Wired Sussex to come instead. (Only joking, it was Greg's birthday and he was busy elsewhere! Happy Birthday Greg!!)

Anyway, I digress. April saw your intrepid team of burger grazing masticators heading on over to the peculiarly furnished MEATliquor on York Place in Brighton. Now when I say peculiarly furnished what I actually mean is that the decor in this little place in Brighton's London Road area is like nothing you've probably experienced before. That is unless you've ever sat down for lunch at Laser Quest, in a cage, under the watchful eye of a multicoloured, flashing clown. Oh, you have? Well, I'm terribly sorry. Let's move on.

Meatliquor's actually been on our list for some time and, I'll be honest here, we've heard mixed things about it - mostly good, but with the occasional negative review thrown in for good measure. The internet however has nothing but for love for this place and the internet never lies, does it?

To give a little bit of background to the Meatliquor story we need to go back to the summer of 2009 when Yianni Papoutsis, who was working as a tecnician with the London Ballet, set up a burger van in a car park near a Peckham industrial estate. What followed is pretty much the stuff of legend, and in some quarters Papoutsis is regarded as the godfather of the street dining burger bar experience. Meatliquor's first permanent restaurant opened in Marylebone in 2011 soon to be followed by another in Covent Garden, then Hoxton, Brixton and, the first outside of London, Brighton in 2013. Their ethos is a simple one, to deliver oozy, greasy, meaty deliciousness to hungry peeps like me and you.

So, did they deliver?

Well, let's get down to business shall we? What, exactly, is on that Meatliquor menu? The menu consists of 5 beef burgers, one halloumi and mushroom burger and three varieties of chicken burger. The beef burgers range from the standard entry level Cheesburger, with red onions, pickles, lettuce, mustard and ketchup, through the Green Chili Cheeseburger, same as the cheese but with added spicy chili butter, to the Red Chili Burger which also includes jalapenos.

As far as what we ordered, Abby and guest reviewer Kelly plumped for the Bacon Cheeseburger which consisted of a single beef patty, cheese, bacon, red onions, pickles, lettuce, mustard and ketchup. Abby, of course, asked for hers to be prepared sans onions, as she doesn't like them (even though she ate them at the beer dispensary without noticing!)

Kelly scored the place and the fare pretty highly on her first lunchtime trip out with the Code 7 team. She liked the hot cross bun themed burger bap; it is Easter after all but wasn't so keen on the school canteen serving tray for 5, on grease proof paper!

Steve, Dan and I all tucked into the main event, the Dead Hippie. This little beauty was made up of two mustard fried beef patties, lettuce, cheese, pickles, minced white onions and 'dead hippie' sauce (a closely guarded colonelesque style secret!)

Most meals were served with fries, one was served with fried pickles and all were washed down with bottomless glasses of fizzy pop. No alcohol here, thanks. We're professionals.

It's fair to say that amongst the team there's been a fair amount of disagreement when it comes to scoring this place. Dan and I have nearly come to blows over the burger juiciness (not for the first time, and probably not the last either). Dan's burger patty was dry and uninspiring (his words) but mine was gloriously pink, packed full of flavour and generally pretty faultless (my words). There's also been some general grumbling about the bun goodness; again (grumpy) Dan was pretty scathing in his bun review (soggy, flavourless) whereas Abby thought it was fine, perhaps a wee bit on the small side but perfectly adequate.

I've got to say, whilst certainly not the best burger I've tasted on this culinary caper, I really enjoyed my dead hippie. I thought the burger patties themselves were cooked almost to perfection. The bun wasn't perfect but it was pretty good, it held everything together until the last bite and the crunchiness of the pickles and lettuce worked brilliantly with the gooeyness of the dead hippie sauce. It's not the biggest burger you've ever seen but it's a good size and the quality ingredients used are apparent in every bite.

You shouldn't take our word for it though. You should definitely get down there and try it for yourselves. In terms of where this one sits in comparison to some of the others, it doesn't rank as high as some, but maybe that's more to do with the consistency rather than the overall quality - there's some wild variations in the scorecards here. I loved it!

Just one final point from me before I go, can I just give a big up to Meatliquor for their generous portion of fries, served traditionally, in a bowl. Call me old fashioned but I'm fed up with getting fries served up in a mug or a miniature watering can! Props!

Nothing much to report here I'm afraid as our traditional accessibility expert was not with us for this visit. Anecdotally, the whole place is at street level with a huge double door at the front making access for wheelchair users nice and easy. The toilets are easily accessed but I'm unable to confirm whether there were accessible toilets on site. Not much parking available locally.